We’re a bit late to posting about this one; although it’s been in our headphones for a while now we appear to have accidently had a little hiatus. Our weeks have been crammed with paid work stuff and our weekends full of fun adventures so the poor old ‘zine has been a little neglected. No matter though, we’ve never been that bothered about being the first to post about something (who remembers the days before Hype Machine when no-one cared about being ‘first’ and people just wrote about music they felt passionately about? Good times!). So anyway, here we are with the new(est) release from Danny Ashenden A.K.A. Earl Grey. Arabian Nights is the title track from his new(est) EP and takes us further down this one time Cosmic Disco don, as part of The C90s, ‘s journey into the realms of the dark and twisted.

With each release and reMix from Earl Grey we’ve seen him  delve deeper into the world of stripped down, analog grooves. His initial releases giving a nod to his Cosmic Disco roots but opening up a moody Italo sound pallet, it was inevitable that he would end up with both feet firmly planted in the world of strobe-lit Acid. Now, we don’t pretend to hid out love of Acid House, a burbling 303 gets us going (we’re still waiting for Acid Disco to properly become a ‘thing’) so the Earl’s hypnotic synths are right up our street. Arabian Nights plays around with the forms a little, layering 303 lines for added Funk value and mixing up a little old school Electro and Detroit Techno into the mix Juan Atkins style. As ominous as it is groove, Arabian Nights brings the late night, exotic, mysterious, synthetic vibes hard.

I never know whether to spell grey, grey or gray. Is there a difference? I mention this purely so you’ll forgive me if I spell it wrong at any point in this post, as Danny Ashenden, better know as one half of The C90s, has chosen to spell it grey in the moniker of his new solo project, Earl Grey. We’ve already heard a few of his reMixes in the months just gone, but it’s high time we turned out attention to his début EP, released next week on La Belle, which we have been rocking to in the past couple of weeks.

The EP’s titled Not Everyone’s Cup Of Tea, which may be referencing Earl Grey’s departure from The C90s upbeat Disco sound into something a bit deeper, more thoughtful and, dare I say it, a little more avant-garde. But as you know this is a departure that is right up our street, so as Danny busts out the brooding space Italo and synthesizer prog. The EP kicks off with, we would say, it’s strongest track, Through The City. A track that blends SynthWave with the mood of Moroder’s more introspective material, vocoders and analog warblings blend together with rich chords to create an imposing, yet familiar, mood that flows into Jus Clap, a track with more House in it’s DNA. Jus Clap takes an intoxicating warehouse vibe to the extreme, slowing down the Chicago vibe until it’s utterly hypnotic. Regent’s Park’s blend of Tropical percussion and live electronics is nicely intersected with the occasional B-Boy beat in a track that calls to mind the freestyle synthesizer experimentalism of the early 80s. The EP plays out with it’s most accessible, and probably the most DJ friendly, tune Pong. Pong is an undulating slice of Cosmic Disco with hints on Minimal Synth and a sprinkling of House. Delivering a sound not dissimilar to Scandinavian Nu-Disco in it’s perfect blend of the galactic, and the very human. Pong balances icy tones with quirky, playful melodies creating something for your mind and your feet. Not Everyone’s Cup Of Tea is definitely worth investigation for pretty much anyone with an interest in electronic music.

While you’re here check out Earl Grey’s new reMix for LA’s Thrillionaire, and their single of last year, Wie Gehts? (a title that can’t help but remind us of GCSE German), for more of Danny’s warm, enveloping electronics. Folding the gently vocals into the track as another instrument, this reMix wraps the listener in waves of swirling, surprising, sounds.

Earl Grey’s Not Everyone Cup Of Tea EP is released 29th April.

Check out more from Earl Gray on SoundCloud.

Toady seems full of old track that are just seeing the light of day, and sound amazingly fresh despite their age. Check out this reMix from Danny Ashenden, better know as one half of The C90s, in his Earl Grey guise. It’s of Kido Yoji’s  Won’t You Come Again? that, for one reason or another, didn’t make the single. It’s two years old (Kido’s not even realising solo track any more), but it sounds as fresh as anything you’ll hear this year.

Maybe the future Funk was just too futuristic for Yoji’s label? Who knows? What we do know, though, is this tune lays on the laid back synth Fun, thick. The Tokyo producer’s beloved talkbox vocals fit like a glove with Earl Grey’s blissful beats. Like a sunset on a alien shore, this reMix nicely combines a chilled beach groove with a touch of Cosmic Disco. If you like your synth sound spacey, and your Disco relaxed, then this is the tune for you.

We’ve Got Love is the new track from London Disco duo The C90s. We’ve been pretty eagerly awaiting some new material from these two for a while, recently their efforts have been concentrated on mixtapes and some storing DJ spots, but Danny and Jamie are now back with this infectious slice of Indie-Disco.

With a strong New York Disco/DFA groove, We’ve Got Love is their first original track since 2010’s Shine A Light (although both Danny and Jamie have produced as other projects, most recently Earl Grey for Danny) and shows that they haven’t been wasting their time. Honing their skills and sliding toward a smooth sound that is part Disco, part introspective Indie with heaps of retro cool. The beats in this track are almost B-boy and give tune a solid base for a pulsating bass, magical synths and a hushed vocal, all intersected by a funky Superstitious lead line. We’d definitely like to hear more like this please.

The C90s – August Chart Mix = Here it is, London’s disco dons, The C90s, monthly mix of all things Disco and House. This months mix takes a particularly cosmic slant, whether big cosmic Disco or space age House, the tunes are always big.

British Indie-Dance outfit The Egg, of pre-Guetta Walking Away fame,  released their Catch single earlier this month. It’s a nice mix of analog Disco and gangly Indie guitar stuff. The best thing about the single, though, is this reMix from London Disco duo The C90s. Complete flipping the track around, no longer tis there melodic abrasiveness, in it’s place The C90’s bring the smooth…and the cowbell.

Oh yes, it brings the cowbell, gets funky with it, filters some beats and drops a bouncy as hell analog bassline. It’s the prefect Disco combination. The shuffling hats give the rhythm a little twist, and seems to usher the track ever forward. And the point to track is driving toward is the final chorus, whit it’s the uplifting addition of a solo line that carries the track on it’s shoulder to new heights. This isn;t sa summery track in the same was the Tropical masses are, this is a late night, summer in the city, track. Hot urban Disco.

The Egg’s Catch single is out now.

Buy The Egg’s music from:

Don’t forget, this Saturday is the launch party for awesome new SynthWave/Nu-Disco compilation We Are The Future’. Hosted by Lemonade at The Nest in Dalston, London it’s going to be an awesome night. Come and party ‘til the early hours with The C90s, Edwin Van Cleef, Fear Of Tigers (live), Futurecop! (live) and little old me spinning some glorious synth music (and maybe dropping in some previews of forthcoming electronic rumors releases! 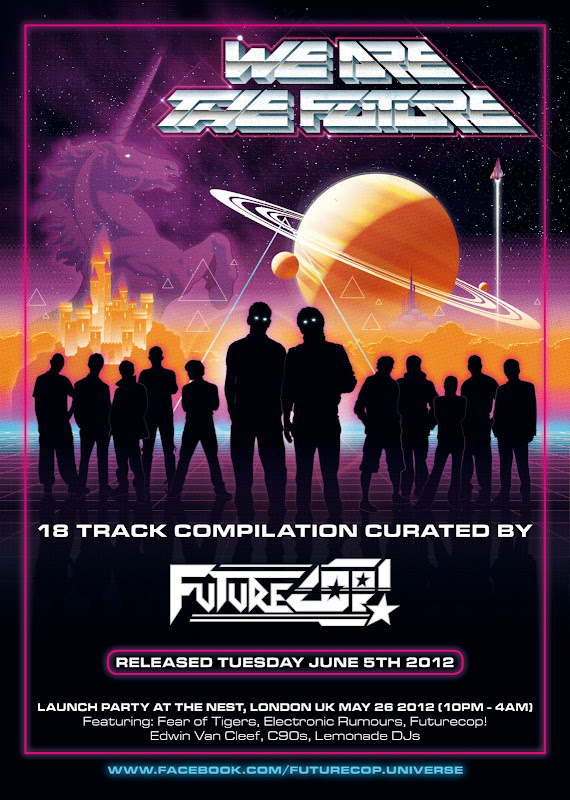 Find all the details for the night right here.

The C90s – May Chart Mix = I swear it hasn’t been a month since The C90s last mix? Maybe it’s just me still rocking Aprils collection. For May they drops a whole host of fresh tunes, including A.N.D.Y. & Vincente’s ‘El Barrio’, a tune we’ve only been teased so far.

If you’re in London on 26th of May you can Catch The C90’s alongside Edwin Van Cleef, Futurecop!, Fear Of Tigers and yours truly at The Nest in Dalston, details here.

The C90s – April Chart Mix = It’s that The C90s Chart mix time of the month and this month the guys drops a killer mix. Over an hour long and crammed with storming tunes.