Berlin based SynthWave producer Norman Knight, better known as Alpha Boy, is fast becoming one of he most prolific artist on the scene. It was only April that he released his last compilation of work, the Blockbuster Album, and he’s already set with a brand new LP. Released today, Heroes On Tape cements Alpha Boy’s status as one of SynthWave’s unsung heroes. How does he keep the quality up?

From the second the album begins, with an intro piece titled Crus’n In 1982, it;s clear that despite his high quantity output, Alpha Boy isn’t just chucking out any old tracks. Heroes On Tape is fourteen track of some of the best ‘80’s inspired Electro around. The album is built around tributes to classic TV shows and movies of the decade. With titles like Master Of The Universe, Macgyver, Harold F., Flux Capacitor, BMX and Starman, the album is is the music equivalent of a night in with a stack of VHS tapes. Continuing the trend seen on Blockbuster, Heroes On Tape keeps the retro soundtrack feel, but moves itself away from standard SynthWave fare with musical nod to classic SynthPop and Pop of the era with rolling drum fills and catchy lead lines. Various tracks take on audio cues too, like Danielson [sic] (as in Daniel San), a homage to The Karate Kid, which gently covers the post-Italo electronics with an oriental feel and the tense sense of urgency found amongst I’m Coming To Get You. Highlights of the album have to be the warm Sci-Fi Italo melodies of Master Of The Universe, which dips and builds and never looses it’s dancefloor excitement. Harold F., a track so full of soaring synth leads that just listening to it is uplifting. Flux Capacitor, which powers along in rapid fire arpeggios, keeping things danceable amidst the hypnotic synths and evocate tones, and the nostalgic electronic pump of BMX. Alpha Boy has delivered another amazingly good body of work here, how he keeps up the pace is anyone’s guess, but he never seems to let the high output damage the music’s quality, in terms of either arrangement or production. Definitely recommended SynthWave.

♫ Alpha Boy – Master Of The Universe

Heroes On Tape is released today at Alpha Boy’s Bandcamp.

I think it is fair to say the Berlin’s Alpha Boy has grown up in these very pages. He first sent us his demo track back in November 2010, where Norman’s love of synthesizer music, the ‘80’s and video games came across in every beat. Since then we’ve seen him evolve and grow more confident in his craft, seen releases on some of the scene’s coolest labels, and a constant output that boarders on the prolific. Each release stronger than the last.

Now Alpha Boy is gearing up for to drop his second full length record, titled ‘Blockbuster’. In part a collection of tracks from his almost factory like output in the last year, in part new tracks, all soundtrack influenced SynthWave that is always rich and emotionally resonant. ‘Follow Me’ is as good an atmospheric intro as it was on the ‘Follow Me’ EP and paves the way for a voyage though synthesizer moods, sweeping form high energy, post-Italo juggernauts such as the familiar ‘Lightstorm’ (Alpha Boy’s Homage to the TV show Life On Mars) to quieter, more mood inducing peices, as with ‘You Are My’, with effortless ease. If you’re at all familiar with Alpha Boy’s previous work you might notice that ‘Blockbuster’ almost moves away from the SynthWave/Outrun sound and more towards a new vision of SynthPop. In-fact, there are tracks on the album, like the Jan Hammer-esque ‘Magic Of Sound’ and ‘It Was All A Dream’ that  almost sound like instrumental versions of vocal tracks, as does the Italo dancefloor gold of ‘As They Do On Your Mind’. Fellow SynthWavers Noir Deco and Jowie Schulner make appearances on the album and bring their distinctive styles to the tracks they collaborate on, the former lending a dark moodiness to ‘Abyss’ and Schuler and Alpha Boys collaboration being the huge soaring Dreamwave we’d expect. Alpha Boy’s ‘Blockbuster’ is a damn impressive second album, it sees a maturity of sound, a moving beyond his roots into new ElectroPop areas whist maintaining the ‘80’s soundtrack influenced Electro theme that had defined his career. What happens next is anyone’s guess, but it’ll be exciting to find out.

The lead track on the EP ‘It Was All A Dream’ is more of the Alpha Boy we know and love. It’s that blend of SynthWave and ChipTune that Alpha Boy does so well. With an awesome selection of sounds, a beautiful,  almost oriental, lead sound playing off against his bitcrushed electronics, and intertwining melodies, Alpha Boy has chosen a track of dreamlike brilliance to jump listeners into his new EP. reMix duties are performed by the always rad Swiss duo Flashworx, who play up the slight oriental feel and work it into their Moroder groove and rousing chords.

♫ Alpha Boy – It Was All A Dream (Flashworx reMix)

‘The ‘Follow Me’ EP is out now on Alpha Boy’s Bandcamp.

Ooooo, an Alpha Boy and Jowie Schulner collaboration! That’s the kind of get together worth of an issue of Marvel Team-Up! Two of the most talented players in on the SynthWave scene getting together is like a meeting of retro-minds. You know how in the ‘70’s when two acclaimed Prog Rock guitarists met on the battlefield of the stage, you just know it’s going to be a technical solo extravaganza, well that’s what this is like, with synths.

And it’s totally epic, retro synth work with a musicality of the highest order. The solos are stratospheric and completely allowed to shine by a stripped down Italo backing. I like to thing Jowie and Alpha Boy took turns with the solos, kinda’ like a soaring synth lead battle. Can you imagine this performed live on keytars? That’d be awesome!

If you search electronic rumors for ‘Alpha Boy’ you’ll find quite a few of his tracks have been featured here, we’ve been a big supporter of Norman Knight’s take on retro synth music and most of those tracks we’ve featured appear on this collection alongside a few new tunes. From the album’s opener ‘Night Thunder’ you immediately get a sense of atmosphere from the tracks, Alpha Boy manages to keep his tunes dancey but also injects an emotional resonance into his music that whisks you away to wherever the subject matter of the tune is. Drawing from Dreamwave, Italo, 80’s instrumental Pop and ChipTune, Alpha Boy is about to drop 14 tracks that anybody into backward looking but forward sounding synth music should definitely seek out.

German producer of 80’s inspired electronic music Alpha Boy is back with a brand new EP, his third. It’s free too!

The ‘Fresh’ EP is four tracks of his particular mix of melodic synthesizer dance, Nu-Disco and ChipTune. The EP kicks off with ‘Chip Child’ and almost oriental arpeggio workout that leads into ‘Falkor’, a sweeping 80’s theme tune of a song. This is RoboPop heaven, deep machine basses underpin soaring cosmic lead lines in a track that is uplifting electro gold. ‘The Fresh Tape’ is more of a slow jam that is followed with ‘Walking On Light’, the EPs finale. ‘Walking On Light’ sends you off on a high combining retro electronics, Disco strings and a baroque feel in a track both banging and emotional.

You can download the whole ‘Fresh’ EP for free here.

Mr. Alpha Boy has dropped off his new tune, and it doesn’t disappoint in an 80’s way.

‘Walking On Light’ sees the German producer getting orchestral and epic atop his retro synth patterns. Adding a baroque touch to his music with strings and harpsichord takes the track to a new dimension that gives an otherworldly feel to the 80’s influenced synth work. Still, Alpha Boy keeps up the energy with a full-on 80’s Pop Electro rhythm section which nicely juxtaposes with the rest of the instrumentation.

Alpha Boy has put the last year of writing and releasing 80’s inspired Synth tunes to good use as all his influences are poured into new EP. Inspired by everything 80’s, from Modern Talking and Phil Collins to episodes of Knight Rider, Alpha Boy would probably be and easiest fit in the Dreamwave scene, but his music stems from a more musically nostalgic place than that. Not necessarily trying to invent 80’s music for contemporary times, AB wraps up his love of 80’s synthesiser music into a style that he sees fit, and it’s a style that, although would work well on the dancefloor, isn’t  exactly dance music. It would be better to say that it’s a danceable synthesiser odyssey that has as much in common with Jean Michel-Jarre as it does with Kavinsky.

Here we have the track ‘Glam’ with its intertwining melodies and slightly oriental feel (again there is JMJ as a point of reference). Alpha Boy’s goal in life is to share with his listeners “a touch of the great feeling of the 80’s”…well, mission accomplished!

The ‘Douce Folie’ EP is out now, go check it out! 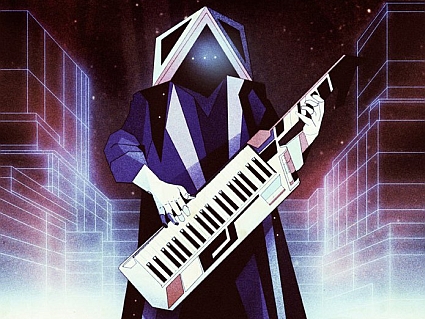 I love Alpha Boy’s tunes, the 80’s-esq melodies he plays around with are amazing. Right here we have two tracks off the free EP, ‘Tron’ is an awesome, sweeping epic of a tune which features pretty much everything I want from instrumental synthesizer music. Driving beats and bass and soaring leads. ‘Left And Right’ is a harder affair, a stomping dancefloor monster stacked thick with video game sounds.

You can get Alpha Boy’s whole free EP here.

Berlin’s Alpha Boy is one of the coolest producers I have come across in recent months.

This 25 year old Xibalba first dipped his 80’s inspired toe in the waters of electronic music making when he received a PlayStation 1 and Music 2000 for X-mas, the rest is a history that is still being written. Falling in, mostly with the Dreamwave crowd, Alpha Boy is even more 80’s influenced, citing the likes of Harold Faltermeyer as an influence. These influences drive him to create danceable, yet strongly emotive, retro synth music.

He’s just releasing a new EP, ‘The Return Of 1986’, which perfectly showcases his cinematic brand of Electro. Check out these two tracks. ‘Stardust’ is an deep, analog, spacesynth tune with an almost EBM-esq driving force layered with sweeping optimistic lead lines while ‘The Wraith 1986’ (presumably named for the awesome Movie featuring the even more awesome Sherilyn Fenn!) is an epic midnight drive of a tune with hints of ChipTune amongst the surging leads.

Look out Kavinsky is all I can say!