London synth Disco collective Nude Disco are gearing up for the release of their second compilation album. Out soon, if Selections Vol. 2 is anything like the first album we’re in for a treat. To hype thing up a bit, Vern is releasing some of his own edits to get your musical juices flowing. First up is this stomping dancefloor take on Lord Philip Oakey & Giorgio Moroder’s third single from their self titled 1984 album; Be My Lover Now.

This is an edit in the truest sense of the word. Vern has taken what works best from his years of DJing experience, taken the track apart, and re-rolled it into the kind of thing that packs his monthly Brixton club night. Bigger sounding beats, bigger sounding bass, driving hi-hats; but leaving the spirit of the song intact; ‘cos you don’t fuck with Oakey and Moroder. The result is a nice crate secret weapon. Apparently there’s more on the way. 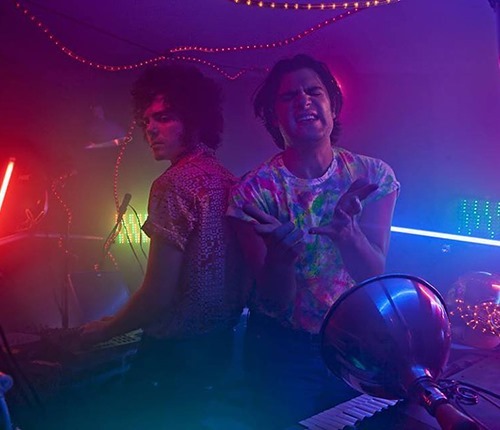 Riding high on a couple of amazing and well received singles, New York DiscoPop duo French Horn Rebellion recently asked their fans what track they should cover. Well, the fans have spoken and the choice cut comes straight from our beloved The Human League and their most recognisable hit, Don’t You Want Me. Mess with The Human League and got it wrong at your peril, let’s check it out.

Bringing the tempo down and replacing the originals abrasive synths with a dreamy laid back funk, French Horn Rebellion make the track pretty unrecognisable. The lyrics crooned, the hook hammered out slap bass style this version of the tune slinks it’s way through lounge Disco until it finally nods toward the decade that spawned the song with some fidgety 80s synths. Not quite as good as the original, but a damn good attempt to reinvent the track. French Horn Rebellion get a pass.

French Horn Rebellion’s Dancing Out single is out now.

Two of our favourite bands this week, firstly the mighty The Human League with Open Your Heart from one of the greatest albums ever made, 1981’s Dare.

It’s our last Goin’ Old School before X-mas, so we’re going to continue the TOTP theme with some actual X-Mas TOTP performances, starting with Heaven 17‘s Temptation from 1983.

Followed swiftly be a 1981 performance of Don’t You Want Me by The Human League.

And ending with the Pet Shop Boys in 1988 with Heart.

Today we are Goin’ Old School, and goin’ Sheffield. Kicking off with Heaven 17’s Influential, and charged  Lets All Make A Bomb from 1981’s Penthouse & Pavement.

Sheffield’s unsung ElectroPop heroes Thompson Twins with a TOTP performance of 1983’s Love On Your Side.

We’re going all SynthPop ballad’s today, starting with Depeche Mode’s Somebody, from 1984.

Next, because I like to slip a little The Human League in wherever I can, it’s 1986’s Human.

And we’ll finish up with the ultimate ‘80’s ballad. Spandau Ballet’s True, from 1983

The League Unlimited Orchestra’s Love And Dancing is, of course, a The Human League album and not for the first time have the worlds of Nu-Disco legend Aeroplane and The Human League come together. Exciting stuff. So who’s that cheeky chappy in the photo? Well, that (for the 1% of readers of this site who wouldn’t know, but really should) is the late, great, Martin Rushent. He, basically, was The League Unlimited Orchestra. He’s the man who produced the greatest album ever made, The Human League’s Dare from 1981. Pressured by their Record Label for more released Rushent came up with the idea of releasing an record of Dub and Mixes of tracks from Dare, thus inventing the reMix album. A selection of Instrumentals to the untrained ear Love And Dancing is actually full of pretty complex and divergent reMixes. And mostly the work of Rushent.

So, for a long time Vito’s personal edit of the Love And Dancing version of Don’t You Want Me? was a staple of his set, originally put together for a BBC Radio 1 Essential Mix. Vito leaves the track largely intact, which is why it’s an edit not a reMix, subtly bring out it’s dancefloor qualities and stripping everything that’s not needed in a set. I think Martin would be proud that even now, in 2012, people are still crazy for his tunes.

♫ The League Unlimited Orchestra – Don’t You Want Me? (Aeropop Edit)

Buy The Human League’s music from:

From 1988 it’s Coldcut’s first collaboration with singer Yazz in ‘Doctorin’ The House’. Horns!

Remember when Prince wasn’t batshit insane? Stuff like this happened! Here’s Prince And The Revolution with 1984’s ‘Let’s Go Crazy’.

This week we’re kicking it TOTP style with three performances, first up The Human League in 1982 with ‘Mirror Man’.

And finally, ‘Things Can Only Get Better’ in 1985 from Howard Jones.

This was a no-brainer really. Last year’s entry into our Hall Of Fame was a toss-up between Kraftwerk (who ended up being entered) and this band. The band that practically invented SynthPop and in their decades long career have never once wavered from the path of electronic Pop music.

If you are at all into synthesizer music with a Pop edge then everything you listen to owes a debt to The Human League. Sure, the building blocks were being put in place by numerous musical movements in Europe (including The League’s own electronic experimentalism as part of the late ‘70’s scene in Sheffield, from the moment founders Martyn Ware and Ian Marsh recruited Philip Oakey to sing over their avant-garde soundscapes) but it took the disassembling of The Human League Mk1, the inclusion of the schoolgirls Susan Ann Sulley and Joanne Catherall, and a new band with the legendary Martin Rushent on production to allow all the pieces of the SynthPop puzzle to fall into place and one of the greatest albums of all time, ‘Dare!’ to be released. I consider ‘Dare!’ to be the first proper, and deliberate, SynthPop record made. Oh, I know there was music that came in the couple of years before, but it all had airs and graces of being something else. Whether Gary Numan’s happy fluke, John Foxx’s dark avant-garde, or Ultravox trying something new, they were, although creating awesome music, just finding their footing. The Human League were a proper SynthPop band. Unashamedly synth. Unashamedly Pop .

And Phil, with Susan and Joanne ever at his side, has never lost sight of what he wanted to make. Electronic Pop music. Moving with the times through the late ‘80’s Electro Soul of the Jimmy Jam and Terry Lewis produced ‘Crash’, the Mid-‘90’s Pop-Trance of ‘Octopus’, to the current Electro sound of ‘Credo’ (on Wall Of Sound), The Human League have, while their early ‘80’s contemporaries morphed into AOR acts, always produced fresh electronic music. Their latest offerings roping in the likes of Aeroplane and Plastic Plates for reMix duties, another indication of the band’s continued relevance.

The music and career of The Human League inspire everything music related I do, most importantly this website. As far as I’m concerned that are the godfathers, the royal family, the Mr. Miyagis and the Yodas of ElectroPop, and deserve their place, no question, in the Hall Of Fame. 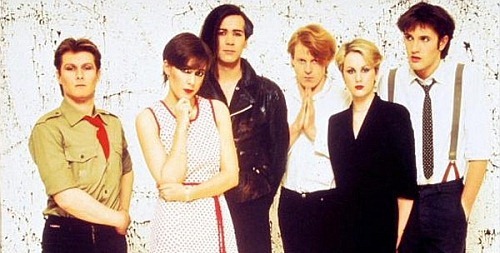 ♫ The Human League – Love Action (I Believe In Love)

Buy The Human League’s music from: