UK band Lovestarrs are the Rocky Balboa of the SynthPop world. They keep getting knocked down, and keep getting back up again. Sarah Mackintosh rose to critical acclaim as The Good Natured; starting with her Grandma’s old Yamaha keyboard and ending up as one of Britain’s most hotly tipped Indie-Electro acts. Juggling moody lyrics and a Gothy aesthetic with catchy and rousing ElectroPop tunes, The Good Natured were one of the more interesting and unique acts in a saturated mid-2000’s scene.

The the setbacks begun. Signing to Parlophone seemed like a good thing at the time with the backing of another EP and the announcement of the forthcoming album, to be titled Prism. A good thing short-lived though with the news, after a period of quiet, that The Good Natured had been dropped from the major and had spent the previous few month trying to secure the rights to the Prism masters; to no avail. The album was buried, and The Good Natured died.

In our opinion, this is the biggest dick move a major label can pull. We’ve seen it happen before and we’ll see it happen again. We don’t understand why, if you’re dropping an artist, you can’t just let them release their recordings. Sure, you’ve paid for them; so let them release them themselves and take a cut (surely that way at least you get something back for the recordings you paid for rather than nothing at all). It makes no sense to us and largely just comes across as spiteful.

Anyhoo, you can’t keep a good act down; and with almost a middle finger to the music industry, Sarah came bursting back on our radar as the bombastic Lovestarrs. Backed by her brother Hamish, Sarah’s new output was buoyant and optimistic. Pink replaced back and exuberance replaced gloom; and their début single, Get Your Sexy On, was a party fuelling manifesto proclaiming that Lovestarrs was a different beast to The Good Natured, keeping the lush SynthPop textures but washing them in a lavish, colourful nostalgia (epitomised by 80s Love Song, one of our top tunes of 2014).

Now staunchly DIY (and who can blame them) despite working with indie label Defdisco, Lovestarrs have set up a Kickstarter campaign to cover the release of their next two EPs and début album. The plan is to pay for the releases themselves, and licence them to Defdisco. The desire to pay for, and own, their own records is completely understandable coming from a band who had the last album they recorded held hostage. It’s one of the worthier Kickstarter campaigns we’ve come across. These guys deserve to own their own music, we can imagine how heartbreaking it was to record your début album and then have it disappeared by gangsters.

Lovestarrs are serious about this too; one of the rewards (in exchange for a shit ton of money!) is Sarah’s Grandma’s aforementioned Yamaha keyboard!

The duo have been releasing teasers of what to expect from the releases, you will hopefully find it in your heart it help out with, on their SoundCloud page in the past couple of weeks. From the chant-a-long fun of WTF to the robotic rabble-rousing of Frank Sinatra the album sounds like it’ll be wearing it’s 80s influences on it’s sleeve. Tracks like Somebody Like You sound classic Sarah Macintosh (whether The Good Natured or Lovestarrs) while the likes of Good Girls sound like the will bring something new, and more contemporary, to the table.

Just do it. Go and contribute. Lovestarrs deserve this and, goddammit, we want this album released.

Get on board with Lovestarrs’ Kickstarter campaign here.

It seems like ElectroPop heroes Lovestarrs have well and truly shaken off the manacles of The Good Natured as Sarah and crew joyously revel in their new found freedom. After the monster rabble rousing début (comeback?) single Get Your Sexy On, team Lovestarrs have been drip feeding us a string of funky and uplifting tracks from their forthcoming new EP, Supernova. Well, premièring right here is the final drip ahead of Supernova’s release. This is 80’s Love Song.

With a surprising amount of retro Boogie in it’s DNA, 80’s Love Song is an exuberant and energetic hot-summer-nights anthem. It’s sassier and slinkier than anything we’ve heard from Lovestarrs (or The Good Natured) to date; rolling on a buoyant Disco groove, leaden with irresistible bass, the tune could have quite easily made for the latest vintage-tinged floorfiller. Not content with filling dancefloors alone though, Sarah adds a smooth, shimmering, and gloriously British Pop sheen with her urban dreamtime narrative, delivered with an infectious optimism. An interesting take on how DiscoPop should sound, a low down groove paired with Indie sensibilities. After a few summers full of LA-esque Indie-DiscoPop tunes, it’s refreshing to get down to a retro summertime vibe that sounds undeniably from the UK. Supernova is looking like the shake-up British SynthPop needs.

ElectroPop troopers Lovestarrs are gearing up the release of their first proper EP. Due out soon the Supernova EP follows the single Get Your Sexy On and a couple of free downloads since their metamorphosis from The Good Natured late last year. The lead track of the forthcoming release is Life Is A Bitch, check it out.

As you might expect from the title, Life Is A Bitch is generally about how shitty life can be. Pretty morose subject matter for a song, but Lovestarrs manage to turn the depressing topic into a jaunty, slightly tropical, Pop tune. Musically it’s dead optimistic, loaded with thick synths and a catchy hook that flows to an island flavour, which makes the whole thing deliciously tongue-in-cheek; and decidedly British. While you’re here check out Lovestarrs last free download, Dukes Up, which we forgot to post, ‘cos stuff.

♫ Lovestarrs – Life Is A Bitch

Lovestarrs’ Supernova EP is out soon.

Ex-The Good Natured, Lovestarrs’ Indie-ElectroPop anthem Get You Sexy On has been on the street a couple of months now, so it’s about that time for a video treatment.

In keeping with the tracks fun, modern Electro meets early 90s Indie vibe the track has got a real 90s Indie video vibe. Colourful and fun to the very end.

Lovestarrs’ Get Your Sexy On is out now.

It’s only been a matter of days since the amazing The Good Natured burst back into our lives, rebranded as Lovestarrs, with their début single, Get Your Sexy On. Now, in time for Valentine’s Day, they deliver this new song, for free no less, the fitting Stupid Cupid.

Yet another glimpse of what to expect from Lovestarrs in the future, this shimmering slice of 80s Pop come complete with a slap bass that would be right at home on Top Of The Pops that plays against big power ballad drums. The whole thing doesn’t sound trite though, it sounds like a festival grade Indie anthem; with Sarah’s vocals showing off that cutting, dark, wit that we love her for. SynthPop haven.

Lovestarrs’ Get Your Sexy On is released 31st March.

Check out more from Lovestarrs on SoundCloud. 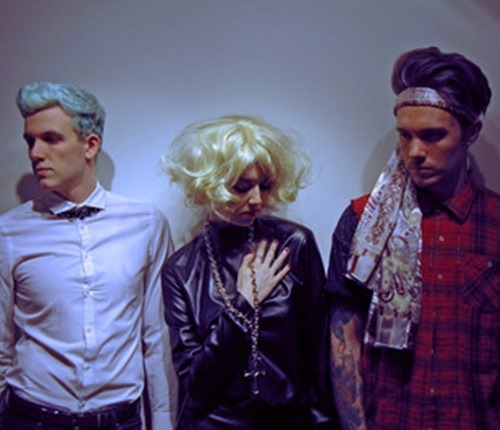 Rising from the ashes of the wonderful The Good Natured, whose long awaited début album was held hostage by their major label, comes Lovestarrs. Frankly, why their label dropped then and kept the album is beyond us, that record could have been huge, there’s no understanding some people, and some peoples taste. Maybe it didn’t fit in to their plans for this year’s ‘rock resurgence’? Ahahahahaha.

Get Your Sexy On, Lovestarrs’ première single will no doubt show them what they are missing. An Indie-Electro anthem that’s bigger than anything The Good Natured released. Taking queues from stadium ElectroPop, summer US Indie, even Acid House, the track is a bombastic, feel good, Pop epic with some big sing-a-long vocals from Sarah amidst a sea of burbling synths and subtle wall-of-sound guitars. the sound of the summer?

♫ Lovestarrs – Get Your Sexy On

Lovestarrs’ Get Your Sexy On is released 31st March.

Check out more from Lovestarrs on SoundCloud.