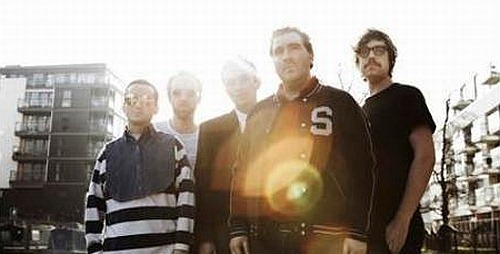 So after the preview we got of new of long awaited new Hot Chip material in the form of ‘Flutes’ the first proper single from their forthcoming ‘In Our Heads’ album has surfaced. On thing I can say for sure, Hot Chip are going to own festival season 2012.

It Hot Chip weird, you just gotta’ deal with it. You either like Hot Chip or you don’t, but their popularity would suggest that most people do ‘get it’. It’s been a while since Hot Chip had anything fresh out and it’s been a while since they were regularly playlisted here, so it takes a while to get back into a Hot Chip state of mind. But if you let yourself slip back into that feeling when you bought the last Hot Chip record, all those moons ago, you’ll soon realise how amazing ‘Night And Day’ is. Its’ got the nervous energy typical of Hot Chip tunes and a bassline that can be described as both creepy and insanely infectious. The bassline is so addictively funky I got a little concerned I might be a guinea pig in a government mind control experiment. This, coupled with Alexis trademark lament and vintage synth sounds is going to rule outdoor parties all summer. Peter Serafinowicz had directed the video again…I’m scared!

‘Night And Day’ is released 4th June on 12” and digital with reMixes from The 2 Bears (natch) and the B-Side, ‘Jelly Babies’.