Glaswegian SynthWaver Garth Knight is normally known round these parts for his high-octane line in cinematic retro Electro. With his latest single he’s flexing his dancefloor muscles and walking with Moroder on Knight Of The Disco. Proving that those rapid fire basslines and nostalgic keys can be just as funky as the can exciting, Garth effortlessly brings his action packed soundtrack vibe to the realm of the mirrorball.

Leaning heavily, as to be expected, on the Italo end of the Disco spectrum, Knight Of the Disco races along on a arpeggiated bassline that’s razor sharp and a Machine Funk beat. This covers the dancefloor compulsion and leaves the rest of the track to revel, quite playfully, in vintage Sci-Fi sounds and Disco pops and zaps. The kind of retro-future Disco tune that you’d find Buck Rogers dancing to, Knight Of the Disco packs some surprisingly emotive Vangelis-esque leads in the mix, resulting in a tune that’ll make you both smile and dance. Get Involved.

♫ Garth Knight – Knight Of The Disco

Garth Knight’s Knight Of The Disco is out now.

One of the top names in the new SynthWave scene is Glaswegian producer Garth Knight, has just released his new EP. Titled, Mandroid, the new record follows on from his slick Goliath album released earlier this year and sees Knight take his rough, cinematic, electronics to ever darker places.

The pulsating, synthesizer soundtrack to some long-forgotten Sci-Fi Horror flick, Mandroid oozes electronic menace as it ploughs though it’s  five tracks. Kicking off with Construction, you can already feel an old school EBM influence infecting Garth Knight’s work as it lays down it’s rapid fire arpeggios and machine beats amidst a sea of haunting and abrasive tones. Escape works a little mid-80s Depeche Mode flavour into the EP with heavy synth bass and ringing chimes that builds up to a droning and evocative finale. The EP’s high energy centrepiece, On The Run once again shows of the EBM styling of the EP, right down to the Industrial purcussion, this is pure Front 242 territory, albeit updated for the SynthWave scene with lush cinematic chords. After the climactic onslaught of On The Run, the rest of the EP delivers a little respite with Sanctuary, a gentle and evocative synth piece where layers of melody wrap themselves around each other, and the EP’s outro, Shut Down a rousing, but ultimately final, cascade of deep synths. All in all, Mandroid is another settling body of work from Garth Knight and at a pay-what-you-like price, can;t really be beat.

♫ Garth Knight – On the Run

Of all the recent crop of new SynthWave artists to break in the last twelve months, Glaswegian artist Garth Knight has stood out from the pack both in terms of composition and production. This has marked his début album as one of the more eagerly anticipated SynthWave releases of 2013. The album saw the light of days earlier this month via Lunar Boogie, and having given it repeated spins in the last week or so we can definitely say it doesn’t disappoint.

The albums title continues Garth’s obsession with the dark side of Knight Rider. Named Goliath after Michael and K.I.T.T.’s evil counterparts Garth and K.A.R.R.’s own semi-truck in the show the record drops lots of Knight Rider references, but musically and lyrically, which nicely sets the tone of the album. Made up of the best of garth’s releases over the past twelve months sprinkled with new tracks, Goliath kicks off with the epic six minute Mainframe which lays out Garth’s particular brand of dirty basslined SynthWave perfectly, giving you a fair amount of time to acclimatise to this world of action packed anthems. Autotron keeps the grimy synth bass vibe going, setting it against haunting pads and if followed by Turbo Boost, the albums first sit-up-and-take-notice track. A rolling Italo jam, Turbo Boost comprises a vintage beat and a spikey FM melody that provide backing for a ridiculously simple, but catchy vocoded vocal. Skipping over Break Point, the album’s aberrant off-track (it’s a bit of an embarrassment compared to the rest of the release), you find Headstart, a frantic, arpeggio fuelled, race track that lift the energy of the album back up and delivers a synthetic rush before the second half of the Goliath. Silent Strike is another standout, drawing dangerously close to ElectroPop in it’s Poppy hooks and euphoric vibe. Silicon Dawn and Transcoding follow, both injecting the collection with a darker tone, before giving way to the retro synth Funk of Solidstate. Solidstate is driven along by a deep, groovy bassline that’s layered with Cosmic synths and an ethereal melody. The album eases you out of it;s world with the Jarre-esque Time The Healer, a beautiful slice of melodic 80s synth work. Goliath is a solid release, and fans of the genre should already have this record in their collection.

Garth Knight’s Goliath is out now.

Glaswegian SynthWaver Garth Knight is back with another new single. We’ve begun to really look forward to Garth’s released in the past few months, he’s really showing himself to be a couple of steps ahead of the retro electro pack when it comes to the professional sound of his production. 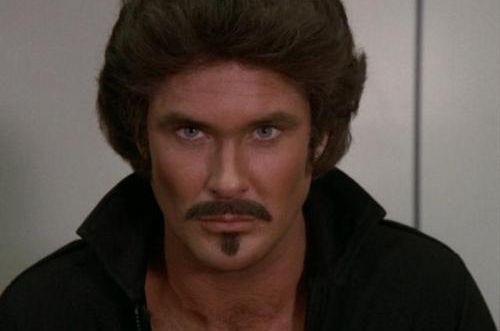 Here’s the new one from Glasgow based SynthWaver Garth Knight who brings a nice combination of retro synth and Disco to the table, with a little Italo twist. Neuron is actually the funkiest thing we’ve heard from this guy to date, and is well worth considering for your X-mas party soundtrack.

Neuron kicks off with a slick, cut-up, Disco sample before launching itself into a bouncy Italo bassline and some seriously haunting synths.. When the tree elements come together the track delivers a nice burst of energy, drawing the track toward a nice bit-crushed breakdown. When the tune slams back in the mix of Disco groove and vintage synth emotion is powerful stuff. Guaranteed to keep them dancing, and loving it.

Garth Knight’s Neuron is out now.

Garth Knight is a SynthWave producer from Glasgow. Named, of course, after Garthe Knight, the Hoff’s villainous doppelganger in Knight Rider. He’s been dropping a bunch of new track over the past few days that really have seen him upping his game. Is Garth Knight ready to go from SynthWave newcomer to SynthWave master?

This new crop of tunes thankfully eschew Knight’s previous tendency to slather everything in wailing guitar and sticks to everything that’s great about SynthWave. With a beautiful grasp of melody knight crafts synthesizer mood that effortlessly carry you along with them. Time the Healer is a perfect example of this. Haunting and subtly the moody Italo backing playing off against the more optimistic melody. Both the use of sound and the use of  melody in this track has a Jarre-esque quality to it and just shows how lilting SynthWave can be without loosing any of it’s toughness. City Streets brings things back to a rapid fire Italo place. This tune must be soundtracking some  high speed chase in a dystopian future, all flaying arpeggios and piercing synths fizzing, like rain on neon bulbs. Headstart makes for the best of both worlds, upbeat and poppy with a jump-up Italo bassline and some amazing playing with arpeggios. Garth Knight is definitely a name we want to hear more from in the future, just so long as he keeps a step back from the six-string.