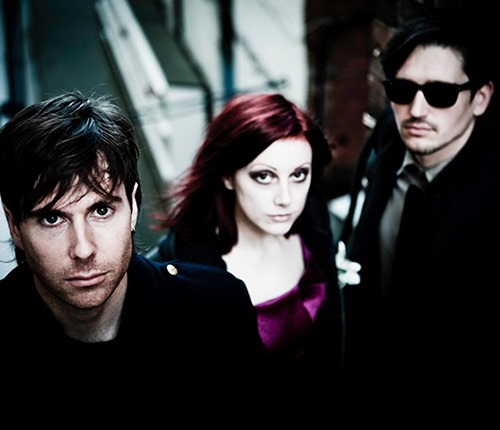 In the past year we’ve given a fair bit of attention to the selection of new singles from British ElectroPop outfit Scarlet Soho, but if you at all a follower of SynthPop in the UK then you’ll know the Southampton based outfit have had had a long and prolific career spanning over a decade. Now, with the latest era of Scarlet Soho earning critical acclaim, the band are releasing a retrospective, Hit The Floor: Favorites And Rarities, of some of their finest moments from their first two albums, 2004’s Divisions Of Decency and 2009’s Warpaint, and a host of never-before-heard material. The album is being released as a strictly limited edition CD the comes equipped with a packed 16 page booklet that serves as a visual history of Scarlet Soho. It;s released at the end of the month, but you can pre-order here.

Scarlet Soho’s sound has evolved significantly over the years, and that’s perfectly reflected on Hit The Floor. From the post-ElectroClash Indie-Electro of Divisions Of Decency to the more guitar oriented Electro Rock of Warpaint, Scarlet Soho’s experimentalism with different styles and strict adherence to decent songwriting above all else had always delivered an interesting listening experience regardless if they are currently playing a sound you dig or not. There’s something for everyone on this compilation, whether it’s the raw electronics of Disconnected and Modern Radio or the polished Indie of This Nausea and Analogue Dialogue (Kill The Beat) you’re bound to find something that will be stuck in your head for the rest of the week. For a taster of what to expect, check out the insanely catchy (if a little overly Rocky) Speak Your Mind for a fine example of Scarlet Soho’s big catchy choruses and waves of lush synths, or this stripped back EBM reMix of What You Need, by Canadian EBM legends Psyche who deliver a nice combination of Piano and unprocessed electronics. That’s just one of the exclusive tracks appearing of this album including a reMix from Kosheen and live material.