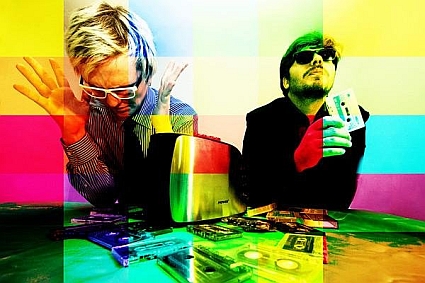 If you thought that Russian Nu-Disco & ElectroPop began and ended with Tesla Boy you’d be sorely mistaken!

Enter The Tapeaters, who have just released their début album ‘Visions’, the duo of Vadim Pukhov and Dimitri Kozlow who are producing some of the slickest DiscoPop, not just in Russia, in the world! The album is track after track of dancefloor driving ElectroPop with groove. Matching up the funky basslines of Nu-Disco with 80’s SynthPop melodies and soft spoken, soulful, vocals, The Tapeaters produce a sound that is pretty hard to beat.

The are, of course, comparisons to be made with their countrymen Tesla Boy, but that’s a good thing both play top quality ElectroPop with a hint of 80’s electronic R&B influence but each band manages to carve out it’s own unique sound within the genre, and if this is a trend of bands from Russia with a similar sound then bring it on!

‘Visions’ is defiantly one of the best début albums to be released in recent times!

♫ The Tapeaters – They Are Coming

the Tapeaters’’Visions’ is out now and the guys will be supporting Cut Copy on their upcoming shows in Russia!

3 comments on “The Tapeaters’ ‘Visions’”