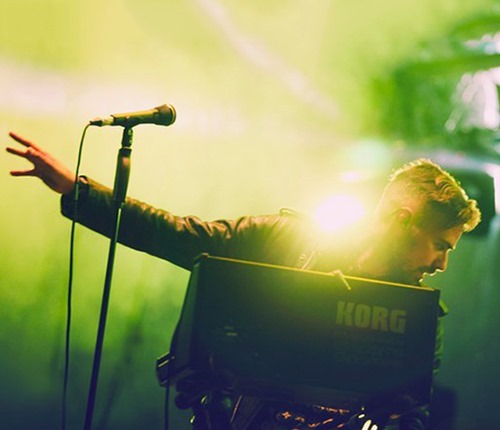 We tend not to make much of a secret round these parts that Russia Dreamwave ElectroPoppers Tesla Boy are amongst our favourite acts around today. From first discovering them deep in the Outrun community on MySpace they always struck a chord with us, combining out then newfound excitement in this (then) new breed of retro cool SynthWave and out love of vocal SynthPop.

After showing us all what they could do with a killer EP, their début album, Modern Thrills, cemented their reputation for being on of the most talented bands around, whether on the Disco, ElectroPop or SynthWave scene, combining all three styles into one form as catchy and Poppy as it was dancefloor friendly. Inspiring an army of Russian SynthWave acts and kicking off the Russian retro scene, Tesla Boy also brought their brand of vintage DiscoPop to the world on their own terms.

Massively successful in their homeland, with the release of the sophomore album, The Universe Made Of Darkness, Tesla Boy are widening their international appeal with a string of high profile US shows and collaborations with the coolest of House music cats. Tesla Boy head honcho Anton Sevidov to a little time out of their promotional schedule to chat with us about where Tesla Boy came from, where it is and where it’s going.

ER: Let’s take it right back to the beginning. We first became aware of Tesla Boy back in the 2009 MySpace days and your first EP, just prior to being picked up by Mullet Records, what had led you to that point? Had you been in bands before? What attracted you to your retro synth sound?

TB: I have been engaged in music all my life, starting as a jazz pianist.  When I was 15, I brought together my first band, and it was so-called acid-jazz, the kind of music we played at that time.  Further electronic music carried me away and I arrived at understanding that I really like the 80s sound very much. I began to style my songs in this manner. And next thing what happened – the public was ready to love it.

ER: Speaking of MySpace, the whole Dreamwave and Nu-Disco thing really took off there, do you feel like the social network was a big help to kick starting your career.

TB: Exactly, I really think that social networks made us well-known.

ER: And now, you’ve just released your second album, The Universe Made Of Darkness, which had widened your international appeal. How are you feeling now that the album is out in the wild? Were you nervous about “the difficult second album” syndrome?

ER: We can hear a bit of an evolution of your sound in the second album. How has the way you write changed in the 3 years since Modern Thrills?

TB: I really wanted to add this sensation of a live concert. I did my best to work from my feelings, doing what I really love to do, without paying attention to the style.

ER: Were your influences for this record different from Modern Thrills? (A little more 90s perhaps?)

TB: That was the time of great change worldwide. In 1991 our state split, and freedom was the choice of the time. It was euphoric and painful at the same time. Change is always painful, although necessary. Those were my thoughts when I was writing 1991.

ER: There’s a couple of collaborations on The Universe Made Of Darkness. With Tyson and Fritz Helder From Azari & III. How did these come about and was there anyone you wanted to work with but it didn’t happen?

TB: I met Fritz when Azari & III came to Moscow. At this time it occurred to us to make a track together.

It was Martin who introduced me to Tyson. Marin also worked on his album.

I really would like to work with Erol Alkan. And write a track with Michael McDonald.

ER: How hook up with Martin Dubkka, your co-producer for the new album?

TB: Martin is a very good musician and our tastes are similar. I really love his style  – he is not imposing al all, I like his ideas, and I am happy with our collaboration.

ER: You’ve been playing live a lot in the US recently, how does playing in America compare to playing in Russia? Are the crowds very different?

TB: To tell the truth,  there is almost no difference. Probably, it is because the young people is our audience, who look very much alike and similar in different countries. Serbians and Mexicans stand out most of all – they are very hot.

ER: If you were to take us on a night out in Moscow, where would we go? What are the highlights of the Moscow scene?

ER: We feature tons of Russian artists on Electronic Rumors (Hot Hot Hawk, 7he Myriads, Serj V, Cosmonaut Grechko, 5 Reasons, Lovinski, Quasars, Sohight & Cheevy, DZA etc…) what is it, do you think, that attracts so many Russian producers to the retro synth sound, and what is it that makes them so good at it (because they really are!)

TB: The Russians are a nation with a very good ear for music. Our heritage is huge – Tchaikovsky, Rakhmaninov, Borodin, Prokofiev. Their music possesses melodic beauty.  This probably relates it to the sound of 80s. This background might  produce this kind of effect.

ER: So what’s in Tesla Boys studio? Especially in terms of Synths and outboard gear.

ER: In your studio, do you have a go-to bit of kit that never fails you. Or a favourite synth?

TB: Juno 60 used to play this role for a long time. Right now I first of all start with piano.

ER: If money, and finding one, no problem, what synth would you love to own?

TB: I would like to own the entire Vince Clark studio.

ER: What’s next for Tesla Boy? Will we see more singles from The Universe Made Of Darkness? Any plans to play live in Europe?

TB: Yes, you will see more singles. We are planning the Broken Doll and Dream Machine for the Fall.  Right now we are shooting video for these songs.

ER: What does a Tesla Boy breakfast consist of? Would it be something more substantial the morning after a big show?

TB: I really love burnt out electric bulbs – the most important thing – they should be fresh-burnt. Otherwise they did not light up in my belly.

Many thanks to Anton to taking the time for a chat.

Tesla Boy’s new album The Universe Made Of Darkness, is out now.

One comment on “[Interview] Tesla Boy; Past, Present & Future”