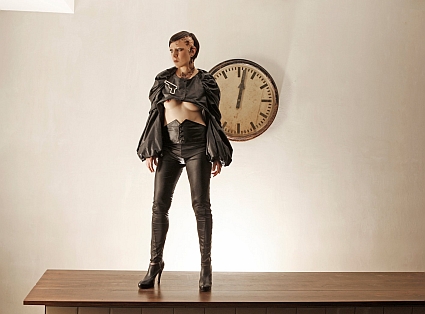 You gotta’ love Billie Ray Martin really, haven’t you? She’s practically a legend in the realm of dance music and she has this massive powerful soul voice, yet she’s always tried to do something interesting. Where she could just be content to warble over the latest fashionable House track she always does something with an edge that wears it’s slightly more eclectic influences on it’s sleeve. That she’s did an EP of Cabaret Voltaire covers last year is a prime example.

So, with “reinventing Italo Disco” as a goal Ms. Martin is back with a new single, ‘Sweet Suburban Disco’, and reinvent Italo she has. This is Italo that was conceived in the rain soaked backstreets of Soho. Deep grooves are overlaid with layer of sparse, cold, synths which are expertly counterpointed by Billie’s huge warm vocals and the best lyrical content we’ve heard in dance music for a while (I’m a huge fan of narratives in music!). Mashing up Italo, ElectroPop and a little Balearic, BRM manages to create a slick package that is as forward-thinking sounding as it is retro.

The reMix duties are provided by Severino, Luke Solomon, Ray Grant and SynthPop godfather Vince Clarke, who turns in a surprisingly deep and edge dancefloor mix.